Traveling can be so many things: a relaxed vacation, a tour of iconic landmarks, an eye-opening learning experience, or even a chance to help others. Perhaps you’ve had trips that fitted all of those descriptions in some way or another but you feel as if you still haven’t experienced the world as much as you’d like. Perhaps you’ve done the chilled-out vacation on a sunny coastal resort but you now want an adventure (or vice versa). It’s about time you stepped out of your comfort zone and sought new experiences from your travels.

Whatever you’re looking for out of your travels, however, there are certain destinations that you simply have to visit before you die. If you don’t have a bucket list of places that you’d like to visit then here are 6 trips that you just have to make at some point in your life. You might say a list of “the best places to visit” is subjective but we think there’s little dispute as to how beautiful and life-changing a journey to these destinations can be. 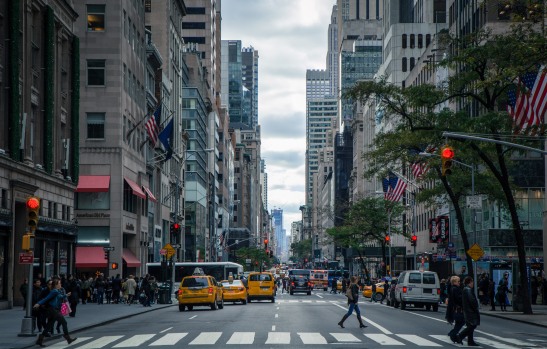 NYC is often the city people think of when they mention America. It may not be the capital of this vast country but it might as well be. There’s something really special about the rich and entirely unique sub-culture of this fantastic city along with its mesmerizing skyline. You’ll obviously want to take in all of the iconic landmarks, first of all. The Statue of Liberty has an awe-inspiring presence in person that just can’t be captured in pictures; you’ll definitely appreciate it more in the flesh. And the Empire State Building gives you a mind-boggling view of the entirety of New York City from its roof.

Of course, this is only the start of what the Big Apple has to offer. As we’ve mentioned before, you really need to visit Central Park whilst you’re there. It’s enough to simply wander through the winding paths of this grassy park at the center of NYC and admire the stunning natural scenery (which looks oddly at home even in the midst of this concrete jungle). Still, you might also want to check out the Central Park Zoo whilst you’re there if you want to see some beautiful animals. You might know it slightly differently from films such as Madagascar but it’s even more magical in person.

The capital of Indonesia is a huge and diverse city. It’s not only the center of all economics and politics in Indonesia but also the hub of this country’s great culture. And that’s really saying something when you consider the scope of this country; Indonesia is composed of thousands of islands and Jakarta is based on the stunning northwest coast of Java island. The rich culture of the city of Jakarta is what draws people from all over the world, however. Betawi people present their culture through many incredible festivals in the city, such as performances at the Kemang Festival.

The cuisine in Jakarta is also a cultural element of which Indonesia is very proud. Dishes such as soto kaki and nasi uduk are delicious. Such dishes are also highly influenced by many different cultures; Indian, Arabic and European cuisines have all had their influence on the Betawi people. And the food is only the start of what Jakarta has to offer. If you just can’t get enough of this incredible capital then you might want to check out sites such as https://rumahdijual.com/jakarta-timur/apartemen-murah to do some research into the local property market. Jakarta is a city which offers beautifully-designed residential zones as well as a beautifully-designed downtown area.

Spain is a beautiful country and you likely didn’t need anyone to tell you that. The city of Barcelona is well worth a visit, of course; the intriguing and unique architecture of Gaudi makes the city like no other place on earth. Still, you might be looking for something a little more unique out of your travels. The city of Seville is well worth visiting. As mentioned over at https://www.lonelyplanet.com/best-in-travel/cities, Seville has put in a lot of work to transform its image over the past decade. It’s opted for a more eco-friendly approach by replacing congested streets with trams and bicycles. It’s also been used in Game of Thrones. And that’s barely scratching the surface of what this city has to offer.

There’s no city on earth quite like the capital of England. London is one of the most fascinating destinations on the planet because it boasts both a rich, detailed history and vibrant contemporary culture. As suggested over at https://www.tripadvisor.com/TravelersChoice-Destinations-cTop-g1, you should definitely start off with a shopping trip down Oxford Street. It’s not only the best places to find fashionable masterpieces in England but in the world. And this is only the beginning of what the capital has to offer.

If you’re interested in a piece of more recent history then you should definitely head to Abbey Road. The Beatles were the most influential band in history and they crafted their masterpieces in Abbey Road studios. You can see the place where history was made; you could even pose for a typical photograph in The Beatles pose on that famous zebra crossing (you know the one).

A bucket list would be nothing without Sydney on it. This is one of the most popular tourist destinations in Australia and there’s good reason for that. It has everything from the natural beauty of the Outback at its doorstep to rich contemporary culture at its city center. As mentioned over at https://travel.usnews.com/rankings/worlds-best-vacations/, a visit to this city would be nothing without seeing the famous Sydney Opera House. It puts on some fantastic performances. You should also head to local beaches such as Bondi whilst you’re there and learn how to catch a gnarly wave.

For those young families, Collette over on Truly Madly Cuckoo has written her top 3 family friendly holiday destinations that will surprise you!

A message to you all from my gorgeous boy: "I love you. Have a very good day. Stay healthy" 🌈 #RainbowTrail
Happy Mother's Day to all the Mums, Step Mums, Nana's & to all those celebrating today. We were going to have Afternoon Tea with the kids Nana but instead we are getting a parcel dropped off with half of it, so we can still do it, just over Skype! 🥂 However you're celebrating, I hope you all have a lovely day and are staying safe 🥰
It may be the weekend but Joshua was far too excited about the home learning pack we have (I merged the things I found with the worksheets his school put together for us). We kept it fun and Joshua made a Paper Plate Pet - he chose to make a Rainbow Cat. I will be sharing little bits everyday on what we are up to, whether it's here on the grid or in stories. If you're on the hunt for free learning resources, this was found on Twinkl. Check out the link in my bio for more sites that are worth a visit 🌈
Oh, to be a child again and have no idea what's going on in the world. Just complete trust in your parents that everything will be okay 🧡
So, how is everybody feeling? For our family, the schools shutting has been great news! But home schooling is quite daunting. I'm spending today preparing to home school, as of Monday. We are also preparing for the possibility of Jamie having to work from home - to be honest, this is what I'm personally hoping for. Juggling home schooling with Oliver and me working from home, is gonna be tough but I'm trying to keep positive about the whole thing. I will try my hardest to fill the days with fun. We are big believers of learning-through-play however we don't know how long schools will be closed for. Potentially months, I guess. We don't want Joshua to fall behind and forget what he has worked so hard on, so we will be doing work the school sets as well as a lot of Mathseeds. Thankfully, we have a pile of workbooks too. This whole pandemic is scary and home schooling is just the tip of the iceberg. Everywhere around us is in meltdown mode and it's frightening to watch. Jobs aren't safe, we don't know what tomorrow will bring so I'm not taking anything for granted. I always thought buying my own home was for the best and gave my family security but then when this happens it makes you realise how unsecure we all are. . Stay safe 🧡
Happy 3 months, my gorgeous little man 🧡 You've already changed so much and we can't wait to watch you grow and see what kind of man you become. ❤🧡💛💚💙💜 Swipe ➡️ to see how he's changed 🥰
%d bloggers like this: