It has been just over 5 years since Joshua was born but I don’t think that I have ever wrote my birth story or gone into too much detail. Most of you will know that I live with PTSD, depression, anxiety and memory loss – most of which is linked to the birth of our first son. While I did have some minor mental health problems before pregnancy, they have developed and become so much worse since.

I’m not going to lie, I started to slip slightly towards the end of my pregnancy with Joshua, but I could never put my finger on exactly why it was happening. My Dad passed away 3 years prior and I never dealt with it. I’m the type of person to brush things under the carpet and allow problems to build and build, and my Dad’s death was no different. The day after his funeral, I got the first train back to University and got on with my life. It sounds awful, but I didn’t tell people and just carried on the best that I could. I think that perhaps everything had started getting the better of me. 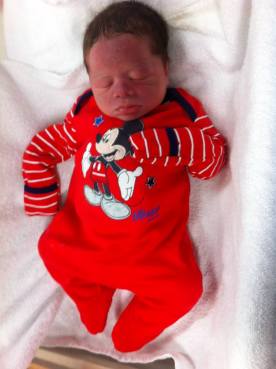 Fast forward to 2014, I was expecting my first child. On 31st August 2014, I had not felt Joshua move or kick all day, so we went up to the hospital for a check-up. Luckily, I hadn’t left it too long (I was already feeling bad about leaving it until 7pm). Joshua’s heart rate was quite low and seeing as I was already 3 days late, they decided to keep me in to induce me in the morning. By the time they had done all the checks it was 1am, so they decided it was best (and baby was okay enough apparently) to wait until morning for me to get some sleep.

They gave me a membrane sweep and took me to my room for the night. Jamie then left to go home, so that he could also get a decent night’s sleep before coming back when I was in labour.

I phoned my Mum to let her know that our baby would be on his way in the morning and that I would let her know once he was born. By the time I settled down in bed and just on the brink of drifting off, Joshua had other ideas and my waters broke at 3am. In the same second, my first contraction started too. I rang the alarm for someone to come in, as me and the bed were flooded. When my waters broke it came out in one huge gush and I actually felt a *pop* in my stomach.

The midwife hooked me up onto some machines to monitor me and left me for around an hour. That hour was one of the worst I have ever experienced. I was left flat on my back, unable to move around and I honestly think that they forgot about me. By the time she came back, I was in a right state. My one contraction hadn’t yet stopped for the whole hour and was very much still at the peak, never fading – in fact I only had the one contraction during my 10.5 hour labour. I knew immediately that something wasn’t right, but no-one else seemed to agree or even care.

They decided to move me to delivery, but I could hardly move off of the bed. I managed to ask for a wheelchair, to which she sarcastically said (with full hand on hip attitude with a huff), “You need a wheelchair, do you?” and rolled her eyes as she went to get one. I think she either thought that I was over-reacting or just didn’t care… I hope it was the first! However, I fail to see how as she could see on the monitors beforehand that my contraction had not yet dipped/faded – unless she just didn’t pay attention to the reading?

Once I got down to delivery, it just got worse with every minute. I asked for someone to ring Jamie, to which they refused. I had to scramble to find my phone to do it myself so that he could get down there. I could barely string words together and it took all my strength to talk to him on the phone – the phone call lasted literally 10 seconds or so. Jamie arrived not too long after I rang him.

After I had been in labour for around 3 or so hours, I had reached my limit. Having a constant contraction that never wavered from its peak, with extreme back pain and pressure, I was ready for an epidural. I begged the midwife, but she refused and walked away from me saying, “No, you don’t need one of those. You’re fine.” Fine? Sweetheart, you try having a labour like me with no painkillers! They then tried giving me a few different painkillers such as gas & air, pethidine etc but they all did absolutely nothing. To be honest, had I not of asked for an epidural, I wouldn’t have been offered anything at all. So, I had no choice but to just roll around in absolute agony, waiting for someone to understand that it just wasn’t right. I may never had laboured before, but even I knew something was wrong – but no-one would listen.

Finally, my midwife swapped shifts and as soon as the other walked in, she immediately got me the epidural I had been begging for which couldn’t have come soon enough. In what felt like seconds, the team were in giving me the epidural and I could finally breathe.

For the next few hours, I slept, and it was amazing. Going from the worst pain I had ever felt to nothing… was the best thing ever. To be honest, I went between sleeping to watching TV with Jamie.

Whilst I was now relaxed, something in my gut still told me that something was wrong. The amount of pain that I had been in was far too much to be considered normal, something had to be wrong – but no one seemed to realise that or care.

Around 10am, I got told that I was 10cm dilated and ready to push, however they weren’t going to let me. They never explained why and to be honest I didn’t think to ask; I put all my trust in them and that they were making the right decisions for me and my baby.

However, around 11am, they quickly changed their mind and made the decision to get our baby out. Something about the way they were acting told me that they may have realised something was wrong. Finally. It took me until 1:35pm, 2.5 hours of pushing, before Joshua was finally born.

When Joshua was born, he was purple head-to-toe and lifeless. As he flopped on my stomach as they cut the cord, I got a tiny glimpse of him before he was taken away. A team crashed in and all I could do was lay there whilst I watched them inject him, use a oxygen mask, insert tubes down his throat and all sorts of scary looking equipment being used. The whole room went silent and I couldn’t hear a single sound, I heard no beeps from the machines or any chattering as they scrambled to save our baby. Everything went quiet to me.

Finally, after what genuinely felt like an hour, he was breathing and starting to get some colour to him. I honestly have no concept of time for how long they were working on him for, but it was long enough for me to think it was hopeless and that they were seconds away from giving up altogether. I waited and waited to see them stop and turn around before telling me the worst had happened. But thankfully that didn’t happen. Joshua may have never had his first cry, but he was okay.

Joshua was then weighed, and they joked around about the size of him. It was the first time anyone in the room smiled and to be honest, I didn’t join in. I was in shock and couldn’t process what just happened – mainly because no-one had bothered to keep me informed about anything.

Despite the midwives making light of the situation and seemingly enjoying themselves, they seemed to not do the thing they were meant to… care for us both. Joshua was left on the weighing scales, naked, for such a long time. I was never offered to hold him, and I genuinely don’t know how many hours old he was before I got to see him properly. Joshua was born at 1:35pm and the next time I have proper memory of is 7:30pm, when I had to get out of bed (with my swollen feet due to the epidural) and walk across the room to see my baby. It was way too early for me to be up and walking, I had to grip hold of furniture around the room to help get me there. But no-one else was going to bring him to me. 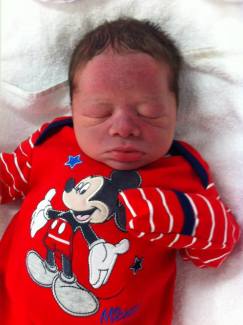 The whole birth experience and after-care was appalling. Not only did they not follow appropriate care during my labour, but we were essentially forgotten about afterwards too. I was never told what went wrong during the labour or explained what they were doing and why, which only added to my mental health problems afterwards and made me spiral out of control.

However, with my current pregnancy the hospital (a different, better one!) have been able to find out that a natural birth should never have been attempted. Joshua was in the wrong position with his shoulders blocking the way, his back in the wrong position, cord wrapped around his face with his elbow sticking out and just generally not safe for birth. They also assume he was laying on my nerves, making the pain much more intense than a normal birth should be. Thankfully, Joshua only had a few minor problems for a few months after birth, which did disappear. However, we almost lost him and apparently, he could have ended up with brain damage as a result of the birth. The team of people I saw during my labour failed to listen to me about my concerns or identify problems – despite Joshua’s heart rate being really low for approx. 18 hours. Had I of been at the hospital I’m under now, it would have been an emergency c-section as he wasn’t safe for a natural delivery.

Whilst I don’t want to forget what happened, as it is still the day I gave birth to my son, I wish the trauma attached was gone and that I looked at the whole day differently. Hopefully, one day, with more work I will get there.